Joomla World Conference 2013 - Where We've Been, Where We're Going

So after an amazing five days in Boston for Joomla's Leadership Summit and World Conference, I wanted to try and get my thoughts on paper about my impressions of the event while the emotions are still fresh on my mind. As I sit in the lobby of the Marriott as we all begin our journeys back home (eventually moved over to Logan Airport), my first thought is that it's eerily quiet here without the Joomla crowd here partying, but just loud enough with having Peter Bui, Brian Teeman, and Jon Neubauer hanging around for a chat.

Business officially started Tuesday night just as I landed with the leadership team coming together for dinner and drinks. For me, it was the first time meeting a few folks in person and seeing some others for the first time in a year and a half, a great reunion with some old friends. After a short night's rest after working through the final tasks for our 2.5.15 and 3.2.0 releases on Wednesday, the meetings started with each team having a day to come together.

For the PLT, our morning started off with the final coordination and release of our scheduled releases for the day. This was quite an experience to do a release with the project leadership in the same building versus being purely virtual coordination. Unfortunately, as we all saw, it wasn't a smooth day as a 2.5.16 release was required later that day. Aside from working on code and issuing CMS releases, the PLT discussed several pressing issues and started working on short and long term goals for where we would like to lead the project from a code perspective. Though only half of the PLT was physically present (our new team members had only officially been brought in the day before and a couple of others couldn't make the trip to Boston), we were able to bring in our remote members via Skype to get their thoughts on our discussions, getting some great discussion points from them as well. Overall, our PLT meeting was highly successful and laid the framework for what I hope will be some great future discussions and progress in the project.

The Joomla 3.2 release Control Room, getting close now! Something new for everyone! #joomla32 pic.twitter.com/aSRbJpI5nX

A special thanks here to Dianne Henning for opening her home to the leadership teams on Wednesday night for dinner. It was a great evening for all of us and I think it was a great way to go out with a bang after ending a three-year term with the OSM board.

Thursday brought the joint leadership together for an interesting day of discussions. Several key topics were discussed over the day, including reviewing where we've been and where we are looking to go (a constant theme from the week in my opinion), highlighting our successes and identifying our continued goals. I think our combined team has a great vision for the next couple of years with a renewed focus on many goals and am excited to see these notes shared with the community in the coming days.

After two productive days of meetings, it was time for the leadership to let their hair down so to speak and relax with many of the conference attendees during the pre-event party on Thursday evening. Our Joomla family was united once again with many fun stories shared and many beers consumed.

The actual conference kicked off Friday morning at the wonderful Joseph B. Martin Conference Center at Harvard University. Before going any further, a huge thank you to the staff of that facility for dealing with the craziness of the Joomla family and being such wonderful hosts to us.

Over the course of the conference, several exciting and thought provoking keynote sessions were presented to the conference attendees. The topics ranged from responsive web design to sharing several great business (and leadership) tips with a Trekkie twist to a history of WordPress and its successes to the well received Ignite session. I personally hope the Ignite becomes a permanent fixture at J & Beyond and JWC, this was a great session with many fun and thought provoking speakers delivering big hits with only a 5-minute window to work with. Thanks to Duke Speer for leading that initiative!

Thanks to all the #JWC13 Igniters pic.twitter.com/0rRq71KGaO

The breakout sessions were well diversified, and I personally was a huge fan of the themed business day on Friday. I think this can be a great opportunity to market to the local community where an event is hosted. I also think that we as a community could possibly market business oriented Joomla!Day events on a Friday in addition to our weekend conferences as this may appeal to another piece of the community as a whole. I took the opportunity to attend a variety of sessions while I could and I wasn't disappointed. Anyone who spoke with me over the weekend knows I took a lot of thought out of Jessica Dunbar's Project Management session and that has motivated me in new ways. I also attended Peter Bui's Case Study on a website he built. It was a great way to get to know Peter as more than just the voice of JoomlaBeat and to see his skill and passions in person. Lastly, Ron van Schaik's Refund Policies was an interesting topic to digest and keep in mind for my own future endeavors.

Unfortunately, after Friday's great first day, I didn't get the opportunity to attend many breakout sessions as I was involved with several sessions either as a presenter or assisting. With that being said, I did find time to attend two of Brian Teeman's sessions; one on security in Joomla and software overall and one on being a better speaker, but that's really it. I got the opportunity on Saturday to speak about integrating Travis-CI into your projects and getting started with the Joomla Framework. You can judge for yourselves as the videos become available for those sessions, but I personally feel they were well received and I hope the attendees came out of those sessions with new ideas about improving their workflows or looking at alternative solutions for software projects.

I hate being behind a podium or in front of the crowd, but at least there's #jbeer here #JWC13 pic.twitter.com/51nChyhW8i

After those sessions, I was involved with the Bug Squash prep and execution sessions throughout the rest of the day. I've got to thank Peter Martin for stepping up during the prep sessions and sharing his session about contributing to the Bug Squad and getting started with squashing bugs (and an equally large thanks for the stroopwafels too). It was quite fun to finally be involved with one of these large in-person sessions and seeing how various people of all skill levels come together with a common goal and how everyone was willing to help everyone else with the beer and the bugs.

Sunday was a day about collaboration. Many working groups met up to discuss the topics they are working on, and I had the opportunity to talk distros with some of the conference attendees. It was interesting to move away from the technical discussions we've had thus far and get the opinions of users and implementors. One thing that left an impression is that there doesn't seem to be a concern about going the distro route if we communicate everything efficiently and keep the code sturdy enough to do it, with a lot of agreement on the topics discussed and some new thoughts to add into this working group.

The midday keynote brought Matt Mullenweg of WordPress fame to the Joomla World Conference, and with open arms at that. His keynote about WordPress' history and community was really well received and his presence enjoyed as many community members, including our project's leaders, spent a fair amount of time discussing various topics with him and Andrew Nacin with what I hope is a better common understanding of each other's thinking and opening doors to more communication between these two communities. I know from my own discussions with Andrew, there was a lot we can learn from one another and a lot of similar activities in both projects while still maintaining individually unique identities. 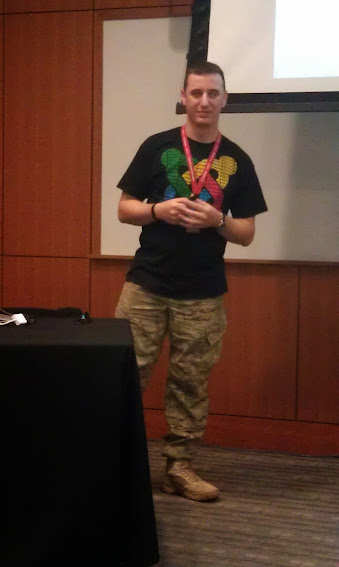 My final session of the conference was about a project I've been collaborating on for the last year (notice I said nothing about leading it; aside from defining a vision, I see no single leader here), our Issue Tracker. For those who weren't at the conference this weekend, you might have missed my announcement about that in that we are now officially open for beta testing. So for those who want to see the CMS use less of Joomlacode and more of GitHub, click that last link and head on over to the tracker and test away!

One of the best things about any conference is the ability to just talk to people and have a good time. In the many discussions I had with folks from across the world and other large projects, it's nice to see there are a lot of folks excited for the future of Joomla, willing to contribute to it, and being open to sharing their ideas with everyone else. I might be exhausted from the lack of sleep or the amount of stuff I do for Joomla, but I ironically sit at the airport now feeling refreshed from a decent night's rest and the amount of positive energy I've gotten from everyone I spent time with. It's hard to not use that momentum and get to work right away, but with all the travel and holidays coming up, we have a chance to collect our thoughts and move forward in an organized manner.

As I close, I have to remember what Jess said as we went our separate ways last night and something I should remember much better given my military experiences. It's never goodbye, only so long for now. Our departures from Boston is not a goodbye; though there may be some time before it happens, we will soon meet again for more beer and fun.

So with that said, a huge thanks to everyone this weekend I had the pleasure of spending time talking with and learning from, and in no particular order (or even a fully inclusive list) this includes the full Joomla Leadership Team, the Anything Digital team (and the #jspouse that tagged along), Ronni Christiansen, Gary Brooks, Nicholas Dionysopoulos, Daniele Rosario, Robert Jacobi, Andrew Nacin, Ryan Ozimek, the many GSoC students and Asian based community members who made the trek, Tessa Mero, Peter Bui, Brian Teeman, and the numerous others whose names I still don't remember or probably forgot about thanks to the one or two extra beers I consumed. Just remember if you're ever in the Nashville area, give me a shout and the coffee is on me :-)